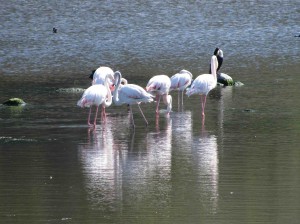 Every winter the Vermont Saltpan provides a temporary shelter and feeding place for large numbers of Greater Flamingoes. This season the largest numbers were recorded in July, when 450 of these odd-looking but rather beautiful birds were counted.

This year, these birds were joined by a small group of much more unusual visitors – Lesser Flamingoes. Whilst rather similar in plumage, these birds are quite a lot smaller than their more common cousins, standing only 1,1 metres high compared to the 1,5 metres of the Greater Flamingo. The most obvious difference in appearance is with the bill, which is a very dark red colour – seeming almost black at a distance – whilst that of the Greater is pale pink with a black tip. It is actually quite easy to confuse the Lesser with juvenile Greater, which has a fully black bill, but is slightly grayish and has no pink in the plumage.

The other big difference between the two species is their food. Whilst the Greater feeds on tiny invertebrate creatures such as brine flies and molluscs, the Lesser feeds on masses of cyanobacteria and diatoms. Both species extract this food from the mud by means of a filtration pump system built into their mouths.

Both these species are nomadic and colonial breeders, and have to make the long journey in springtime to breeding grounds on lakes far to the north in order to continue their life-cycle